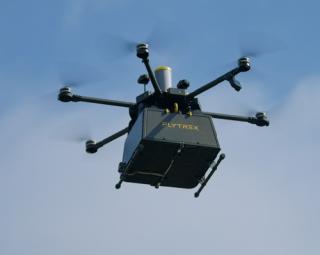 After raising $40 million, on-demand drone delivery company Flytrex said it will use the funds to ramp up expansion throughout the U.S. and advance partnerships with leading retailers and quick-service restaurants.

Flytrex’s latest funding round comes in the wake of several key launches and expansions.

Last month,  Brinker International and Flytrex teamed up to deliver food orders via drone to front and backyards in the neighborhood of Forest Springs. Residents can have food from It’s Just Wings, Brinker International’s virtual brand available from Chili’s Grill & Bar and Maggiano’s Little Italy, delivered to their backyards. Flytrex has been operating in the state since September 2020, beginning in Fayetteville, N.C., also delivering groceries and household items, and has since expanded its service to the town of Raeford. Since February 2021, the volume of Flytrex orders across its North Carolina operations has increased more than tenfold, with thousands of deliveries to date.

Since successfully launching the first fully autonomous urban drone delivery system in Reykjavik, Iceland in 2017, Flytrex has been helping drive regulatory advances aimed at getting drone delivery off the ground. Flytrex participated in the Federal Aviation Administration’s UAS Integration Pilot Program (IPP) which concluded in October 2020, and continued in the FAA’s subsequent initiative, BEYOND, to work with the North Carolina Department of Transportation to help tackle the remaining challenges of UAS integration. In California,  El Pollo Loco teamed up with Flytrex to pilot drone delivery.

“We are committed to supporting companies that have the potential to change people’s lives for the better, and Flytrex’s impact on retailers and consumers alike fits that mission perfectly,” said Eran Barkat, Partner at BRM Group. “Drones are playing a key role in revolutionizing last mile delivery for communities around the world, and we are thrilled to support the Flytrex team as they take the future of food and household delivery to new heights.”