Domino's Introduces its Own Version of Siri to Take Mobile Orders

Domino's Introduces its Own Version of Siri to Take Mobile Orders

By Candice Choi, Associated Press Food Writer - 06/17/2014
Get great content like this right in your inbox.
Subscribe
According to an Associated Press story, Domino's Pizza is introducing a function on its mobile app that lets customers place orders by speaking with a computer-generated voice named "Dom." The rollout is part of an ongoing push by Domino's to take business away from rivals and smaller pizza shops by offering more convenient ways to order.

The company, based in Ann Arbor, Michigan, says the updated app for iPhones and Android devices will deliver a "human-like, conversational" experience, but notes that it will take some time to work out the kinks in the technology.

"It is not perfect," Domino's CEO Patrick Doyle said in an interview. "This is the sort of thing, like any other really new technology launch, you're going to learn, you're going to get better."

Already, mobile and online ordering accounts for 40 percent of Domino's U.S. sales. Growing that portion of its business has become a priority for the chain, with customers increasingly saying they prefer to place orders that way. People who order digitally also tend to spend more and return with greater frequency because they like the convenience, Doyle said. Meanwhile, he noted that smaller pizza shops don't have the money to invest in such technologies.

"It is clearly an area where we'll be able to leverage our scale," he said.

Still, compared with many other cuisines, the pizza industry remains fairly fragmented. Four of the national biggest chains — Domino's, Pizza Hut, Papa John's and Little Caesars — together have a little more than 40 percent of the market, according to Doyle.

Darren Tristano, an analyst with the industry tracker Technomic, said the major chains have the potential to grow their market share by leveraging national marketing campaign and the ability to offer steeper discounts. And while sophisticated digital ordering platforms give the big chains an edge, Tristano said those technologies will eventually become cheap enough for smaller players to adopt.

"That gap is shrinking," Tristano said.

For now, the voice ordering function on the Domino's app is fairly simple.
After pulling up the app, customers type in their address and are taken to the ordering page where they can push a button to order by voice. A voice that identifies itself as "Dom" walks customers through the process by asking if they want additional toppings or other items. To pay, customers still have to type in their credit card information.

Domino's Pizza Inc., which has 5,000 U.S. locations, is partnering with Nuance Communications to offer the technology. 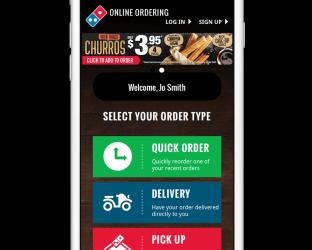