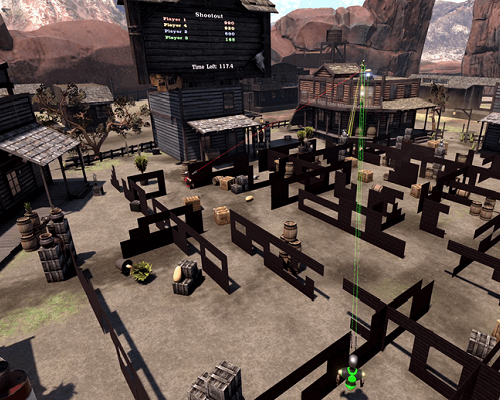 Dave & Buster’s guests will now have the choice of multiple types of VR attractions, both on Dave & Buster’s popular proprietary multiplayer simulator, and now in a free-roaming environment. In this new experience, players can explore without wires and become completely immersed in virtual world experiences and action-packed competition.

VRcade PowerPlay is a truly athletic eSport in VR, a game in which players compete through a series of matches and move naturally as if they were on a real-world playing field: running, ducking, and jumping to defeat their friends. Best described as a combination of Laser Tag and Dodge Ball, VRcade PowerPlay is highly competitive, re-playable and fun for all skill levels. Players may also elect to play a second title, Barking Irons Gunslinger, where they will step into a Wild West town and face off against their friends in the ultimate VR showdown. Players can compete in three different game modes to see who has the fastest hands in the West, including a “High Noon” quick draw duel, a fast-paced search and destroy engagement, and an exciting skeet shoot.

These new VRcade Arena attractions expand on a successful relationship between VRstudios and Dave & Buster’s, providing market-leading commercial VR products and attractions. VRstudios focuses exclusively on the commercial LBE market and offers the most robust catalog of systems and attractions purpose built for LBE operators, all marketed under the VRcade® brand and all centrally managed by their enterprise-class Attraction Management Platform software: AMP. Dave & Buster’s has integrated VRstudios’ AMP system into their popular VR simulator attraction and VRstudios also continues to develop multiple high-profile exclusive attraction experiences for the Dave & Buster’s simulator, including most recently Dragonfrost, Star Trek: Dark Remnant, and Men in Black: Galactic Getaway.