06/03/2016
Get great content like this right in your inbox.
Subscribe
Chick-fil-A® launched Chick-fil-A One TM, a mobile app that gives customers a new way to experience Chick-fil-A. The app is designed to give customers more choices to better meet their needs, including the ability to customize their meal, order and pay in advance and skip the line at the register, speeding up the process of waiting at the counter or drive-thru.

According to a recent survey commissioned by Chick-fil-A, 82 percent of millennial parents say they would do almost anything to avoid long lines at fast food restaurants when they are with their children. In fact, nearly half (48 percent) said they would rather not eat at all than stand in a line.

“We know time is valuable, and we’re excited to offer this new convenience that will empower guests to order what they want, when they want it and exactly how they want it, all from their mobile device,” said Michael Lage, senior manager of digital experience for Chick-fil-A. “This app was developed based on customer feedback, so it was specifically designed to give our guests an even more convenient and personalized experience in our restaurant.”

Chick-fil-A One, which replaces the restaurant chain’s previous app, features a unique membership program that will surprise customers with their favorite food for free, based on their preferences and previous orders.  As users order or purchase through Chick-fil-A One, they get closer to their next free offering and can track their progress in the app.

Any customer who downloads (or updates) the free app and creates a Chick-fil-A One account between June 1 and June 11 will receive an offer for a free Chick-fil-A® Chicken Sandwich, Spicy Chicken Sandwich or Grilled Chicken Sandwich. Once the offer is claimed, guests will have until June 30 to redeem their free sandwich.

Chick-fil-A One is available via the Apple App Store or Google Play, or simply by tweeting through an activation?that was custom-built by Twitter for Chick-fil-A. From June 1 through August 14, customers can Tweet #CFAOne with the horizontal cow emoji to receive a prompt to download the app from Twitter directly to their mobile device. Membership is open to anyone over the age of 13.

A key feature of Chick-fil-A One, mobile ordering, allows customers to place a fully-customized order based on his or her meal preferences. Menu items may be customized via the app, and food is prepared when customers “check in” at the restaurant on the app. The check-in signals the kitchen to prepare the meal and ensures guests receive fresh food quickly and on their schedule. Customers can pay through the app and then skip the line to pick up their food at the mobile order counter, saving time for guests on-the-go. Chick-fil-A One will also save favorite orders for easy reordering in the future.

Chick-fil-A launched the first version of its app in 2012. The company began piloting mobile ordering in 2013. All Chick-fil-A One users also have full access to the app’s other features, including nutrition and allergen information and a restaurant locator.

Since its launch on June 1, more than one million customers have joined Chick-fil-A One. The surge quickly boosted Chick-fil-A One to the number one spot in the iTunes App Store only a few hours after the app was announced. It remains in the top position for free apps for the third day in a row, with six registrations taking place every second. Chick-fil-A One has also been installed on more than 450,000 Android devices since the launch.

“The app was developed based on customer feedback, so it’s especially rewarding to see the interest around Chick-fil-A One,” said Lage. 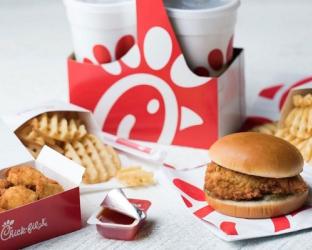