02/18/2015
Get great content like this right in your inbox.
Subscribe
According to a new research report from Berg Insight, the market for NFC-ready POS terminals continued to show strong momentum in 2014 with annual shipments reaching an estimated 9.5 million units worldwide. The attach rate for NFC was highest in EU28+2 and North America, where 80 percent and 75 percent respectively of the POS terminals shipped featured NFC.

NFC was also a very popular feature in many other major markets worldwide, including Brazil, Turkey and China. On a global basis, two out of every five POS terminals that shipped in 2014 included NFC. Berg Insight forecasts that the global installed base of NFC-ready POS terminals will grow at a compound annual growth rate (CAGR) of 28.4 percent from 21.4 million units in 2014 to 74.9 million units in 2019. As a result, more than 70 percent of the world’s POS terminals will be NFC-ready in 2019, up from 28 percent in 2014.

While the installed base of NFC-ready POS terminals has grown quickly, the contactless technology has in many cases not been activated. This is now changing and Berg Insight estimates that approximately 9.0 million POS terminals accepted contactless payments with Visa payWave, MasterCard PayPass or UnionPay Quickpass at the end of 2014.

This is a major increase from 2012 when just 2.6 million POS terminals worldwide had the contactless features enabled. “The sharp increase marks yet another milestone in the industry’s move towards contactless payments and mobile wallet services”, said Lars Kurkinen, Senior Analyst at Berg Insight. “The data shows that merchants have started to embrace NFC, which up until now has been a missing piece in the puzzle”, concludes Mr Kurkinen. 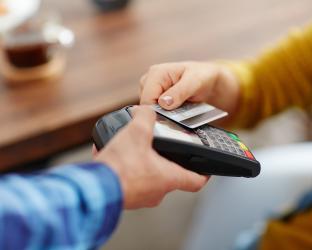