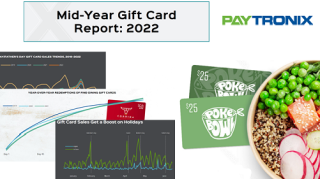 Restaurant sales growth that showed up at the end of 2021 has continued through the first half of 2022, according to Paytronix Systems Inc.’s Mid-Year Gift Card Report 2022. The overall number of gift cards sold in 2021 increased by 22% year over year, but even with the continued growth, sales in the first half of 2022 remain 2% behind 2021 levels.

32% of restaurants say their promotions are effective or extremely effective, according to HT's 2022 Restaurant Technology Study

Here's to the Holidays

Key increases in sales coincided with the major holidays, including Valentine’s Day, Easter, Mother’s Day, and Father’s Day, with graduation season also playing a key role. Consumers also showed slightly differing purchasing habits when it came to choosing physical or digital cards. While sales of physical cards remained higher overall, their sales numbers often peaked in the days leading up to a holiday, with digital card sales peaking on the day of.

Paytronix says these numbers signal a strong start to 2022, with consumers appearing to feel optimistic about going out in person. They also appear eager to treat themselves and others, with fine-dining gift card redemption rates hitting an all-time high, further indicating a desire to return to that particular concept. This demonstrates an enduring, rather than a seasonal, trend.

Redemption rates overall are lower compared with previous years, but that is due, in large part, to slowdowns in QSR redemptions. But redemptions are up at full-service restaurants, mirroring the increase in purchase numbers.