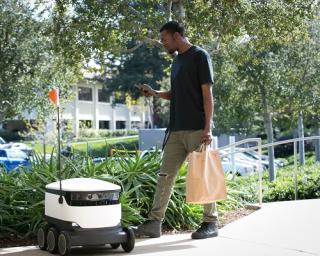 Sodexo and Starship plan to continue to expand the program to additional campuses.

More and more college students will have the convenience of receiving food delivered by robot, thanks to a partnership between Starship Technologies and Sodexo, Inc.

The two companies have been delivering breakfast and other meals autonomously at George Mason and at Northern Arizona University’s (NAU) Flagstaff campus.

Starship Technologies and Sodexo, Inc. have been delivering breakfast and other meals autonomously since the two companies joined forces.

To help celebrate the launch of a fleet of more than 30 robots on the Flagstaff campus and raise awareness of the breakfast offerings, the companies are partnering with Einstein Bros. The school’s nearly 25,000 students and faculty can now use the Starship app (iOS and Android) to order food and drinks from local retailers to be delivered anywhere on campus, within minutes. Each on-demand delivery costs just $1.99 and also works in conjunction with the student meal plan. Other participating on-campus retailers include national chain Star Ginger, as well as restaurants Cobrizo Mexican Grill, Turnip the Greens, G’s NY Style Deli, and The Wedge Market and Pizza.

The Starship delivery robots began delivering at George Mason University (GMU) at the end of January and have been receiving positive reviews and were featured on a National Public Radio segment.

This also marks one of the first times that sidewalk delivery robots are operating in Arizona. The state is one of seven that have approved the operation of delivery robots.

To get started, users order their food the Starship Deliveries app and then drop a pin where they want their delivery to be sent. They can then watch as the robot makes its journey via an interactive map. Once the robot arrives, they receive an alert, and can then meet and unlock it through the app. The delivery usually takes just a matter of minutes, depending on the menu items ordered and the distance the robot must travel. Each robot can carry up to 20 pounds.

“Sodexo oversees dining services at more than 700 colleges and universities which gives us unique insights into the evolving needs and preferences of students,” said Barry Telford, CEO, Universities West, Sodexo North America. “Today’s college students are prolific users of food delivery apps and they place a high value on convenience, ease and diversity of options, so we are thrilled to be able to provide this cutting-edge robot delivery service to Northern Arizona University via our partnership with Starship.”

The robots use a combination of sophisticated machine learning, artificial intelligence and sensors to travel on sidewalks and navigate around obstacles. The computer vision-based navigation helps the robots to map their environment to the nearest inch. The robots can cross streets, climb curbs, travel at night and operate in both rain and snow. A team of humans can also monitor their progress remotely and can take control at a moment’s notice.

Sodexo and Starship plan to continue to expand the program to additional campus locations globally in the future.