Panera Bread announced that it has entered into a definitive agreement to acquire Au Bon Pain Holding Co. Inc., parent company of Au Bon Pain. The Boston-based bakery-cafe chain has 304 units worldwide, and will be part of Panera’s initiative to intensify growth in new real estate channels, including hospitals, universities, transportation centers and urban locations, among others.

Terms of the transaction, which is expected to close during the fourth quarter, were not disclosed. ABP was advised by North Point Advisors LLC and Kirkland & Ellis LLP, and Panera was advised by Skadden, Arps, Slate, Meagher & Flom LLP.

The acquisition will bring Au Bon Pain and Panera together again. Ron Shaich, Panera’s founder, Chairman and CEO, and his late partner Louis Kane created Au Bon Pain Co. Inc. in 1981. The company went public in 1991 and acquired Saint Louis Bread Company in 1993. Saint Louis Bread was renamed Panera and, in 1999, Au Bon Pain was sold so that all human and capital resources available at that time could be focused on Panera.

Comment from Ron Shaich, Panera founder, Chairman and CEO, on the ABP acquisition:

“With the acquisition we are announcing today, we are bringing Au Bon Pain and Panera together again. This acquisition offers the strategic opportunity for us to grow in several new real estate channels, including hospitals, universities, transportation centers and urban locations, among others.” 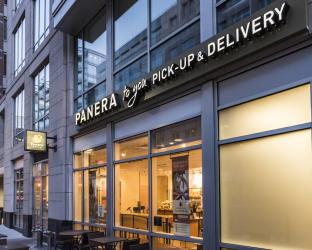