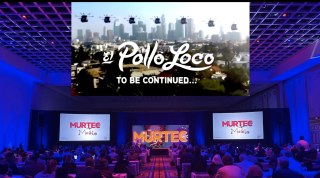 Look up in the sky. It’s not Amazon. It’s not Google. It’s El Pollo Loco, with cutting-edge drone delivery, coming soon to a town near you. “It’s the wow factor,” aptly stated Andrew Rebhun, CMO for the beloved brand. Rebhun told a packed house at MURTEC they tapped into the magical delivery drone formula via multi-departmental partnerships, “getting everyone on board to believe in a new path forward”. One that doesn’t take traditional roads, no doubt.

It’s no secret restaurants are struggling with delivery. In addition to the price of doing business with third-parties, there’s logistics, labor and now sky-high fuel prices to consider. During the pandemic, Rebhun admitted they leaned into the delivery players, and that doing business with them was a huge part of staying viable. He also admitted labor was a constant challenge, and at times they had to turn off some order modes due to not having enough staff to run orders out to customers.

Out of the chaos came a healthy, here-to-stay delivery-on-demand revenue stream, so they found a way to deliver profitably for the business - while minimizing labor challenges.

“Consumers are looking for disruption. We’re proud of the work done overall,” he said, adding that El Pollo Loco doesn’t own the drones, there’s no tipping and no fuel surcharges. “Consumers receive nickel and dime fees (ordering delivery normally), and we take that away with our version of drone delivery.”

What’s next for the brand? Loyalty. In addition to entrusting the most loyal customers to pilot drone delivery, Rebhun is excited about up-leveling the company’s loyalty program. “We are re-imagining the customer experience, and understanding what that journey looks like,” he said. Tapping Capital expenditures (CapEx) funds, the company will fuel growth for its loyalty program.

If anyone ever said they’ll believe it when they see it when it comes to drone delivery, look no further than El Pollo Loco, a brand making chickens fly. Way before the big tech companies get their (drone) ducks in a row.