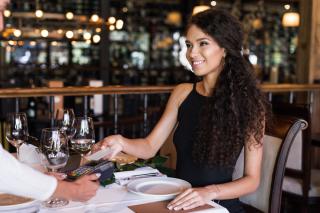 These kinds of announcements are becoming more common place, as FinTech options are arriving across multiple retail outlets, and restaurants. As the name suggests, Target's Wallet allows customers to use their mobile devices to process their order checkouts-saving both money (through digital coupons and discounts) and time.

The announcement follows in the shadow of even larger retail giant, Walmart Stores launching Walmart Pay, which has been predicted to surpass Apple's Apple Pay — the current king in mobile payment apps.

These successful apps aren't restricted to big box retail stores, as restaurants and chains have taken on their own options, such as the popular Starbucks Order and Pay mobile app.

However, the biggest potential is coming from the mobile payment apps that have the wider use across chains and locations. That includes restaurant payment app Glance Pay, from developers Glance Technologies. Backed by an experienced team of FinTech developers and influencers, Glance Pay is growing fast across restaurants, with a record of zero fraud over nearly a year.

According to HT’s 2017 Restaurant Technology study, 3 out of 4 restaurant companies identified as “innovative” said that they planned to focus on mobile payments this year; overall, two thirds of restaurateurs said mobile payments is their top priority on the 2017 innovation agenda.

For reference HT’s 2016 Customer Engagement Technology Study found that three out of five diners want to use mobile payments and more than half (56%) say the ability to pay by phone would actually influence their restaurant selection. That study also uncovered a sizeable service gap: less than half (49%) of restaurants offer mobile pay options. Earlier this year, 21% of surveyed restaurants said they’re integrating mobile payments for the first time, while 29% are upgrading their current offering.

Major mobile payments apps that have been gaining rapid acceptance across the market are coming from much larger corporations, such as Apple, Visa and Square. The future of POS payments is looking more and more like it’ll be done over the phone.

The mobile-based payment market is set to explode in the coming years. In 2014, research firm Forrester predicted that in the United States alone the market is expected to hit $142 billion in 2019.

However, the global expectation by 2020 is now significantly  higher, with the mobile payment transaction market expected to reach $2.85 trillion.

As the technology has improved, so, too, has the attitude of consumers who now embrace using their phones for payment. While that acceptance is still drawing skeptics, as safety improves, and location options grow, the wave of mobile payments adoption is increasing in momentum.

So far, the adoption of mobile payments from large enterprises such as CVS, Kohl's, Target, and Walmart has shown that a singular chain store app can and will be accepted by loyal consumers.

However, as many mobile users are bombarded by an onslaught of standalone apps, those that can be used in numerous locations will have a greater advantage.

In a parallel way, it's restaurants that are integrating mobile apps at a rate as fast as, or faster than, the big-box retailers.

Whether it's through using an app to book a reservation, delivering food, or paying the check, phones and food are becoming fast friends.

Restaurant diners want their experiences to be swifter from start to finish.

Glance Pay has already been adopted by chains in Canada such as Ricky's Restaurant Group with close to 150 locations in Canada, and now more recently, Fatburger Canada with 52 locations across the country.

Through its anti-fraud expertise, Glance Pay is incorporating its own cryptocurrency that will correspond with the app's built-in customer loyalty incentives.