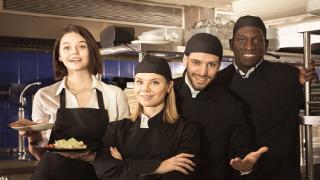 The hospitality industry navigated numerous obstacles during the pandemic and is continuing efforts to recover in an uncertain economy. In order to overcome current and future challenges, the industry will need to shift the ways employees are recruited, retained and appreciated.

Industry leaders can do this by offering better pay, better benefits, and more intentionality in creating a supportive work environment. One specific benefit becoming more sought after is earned wage access (EWA), also known as on-demand pay – the ability for workers to access their wages when they earn it, rather than according to their employer’s scheduled payday.

Despite pay raises over the last two years, the hospitality industry continues to have the highest quit rate and lowest pay of any sector. In fact, turnover in the quick-service restaurant industry historically runs higher than other hospitality segments, averaging around 150% even before pandemic challenges. However, data shows that companies that offer EWA benefit from an average 27% reduction in turnover.

On-demand pay was originally created for frontline workers in hourly positions, where it was often used to help meet the need for funds between pay periods. Before on-demand pay, workers struggling to stretch their wages might have turned to predatory and high-interest payday loans, overspending on high-interest cards, or overdrawing their bank accounts. With EWA, workers can always access their wages on their own schedule, providing an increased level of financial flexibility.

Implementing the correct technology tools can augment HR’s efforts and provide modern benefits that appeal to employees, writes this Paylocity executive in this HT exclusive. Providing early access to earned wages is one way that many hotels and restaurants are helping smooth out cash flow issues that employees may face. In fact, 7 out of 10 of the country's largest quick-service restaurant chains offer on-demand pay benefit.

Especially important in the hospitality industry, from hotels to casinos to restaurants, is the option for some platforms to offer electronic tips payments. At Instant, the Instant Tips program streamlines tip disbursement to the Instant Card immediately after each shift, eliminating the need for both employees and owners to keep large amounts of cash on-hand, providing an added safety and security benefit. Additionally, by shifting to an electronic tip process, managers can quickly distribute an entire night’s worth of tips to staff in just minutes, shaving off valuable time that can be used to focus on more high value tasks that drive revenue for the business.

Instant customer, Kevin O’Bold at Ultra Steak, Inc, has spoken highly of the Tips program; “It gives our operators the ability to streamline payments to employees and reduce cash handling. It also provides a safe, effective way to fund our employees on a nightly basis while providing a clean audit trail and state of the art technology to our team.”

EWA currently offers hospitality industry leaders a competitive advantage – and as the technology becomes more widely used, it will become an industry-wide expectation from hourly, salary and tipped workers alike.

Current State of the Hospitality Industry

The quick service space has seen a rise in labor unions in the past several years, including two household names, Chipotle and Starbucks. Despite providing more robust benefits than any other QSR in the country, more than 200 Starbucks stores have unionized or about 2.3% of the company’s locations. Employees at Starbucks have been quoted saying that while they’re technically classified as “essential workers”, they do not feel that way.

Restaurants aren’t the only portion of the hospitality sector facing employee unrest and labor organization. In hotels, as people stopped traveling during the pandemic, stay rates plummeted and workers began to look elsewhere for jobs. As a result, hoteliers are beginning to employ earned wage access programs to increase retention rates as younger hospitality employees seek change and balance in the industry.

Additionally, more figureheads and states are supporting labor unions, with California becoming the first state to unionize their fast food workers. This action allows workers to adopt employment standards and set fair wage practices, which are likely to include EWA. Most Americans also report being in favor of employees organizing for their rights, with a recent Gallup poll finding that Americans have a 71% approval rate of labor unions.

Finally, hospitality workers in Texas have written their own “bill of rights” outlining priorities such as living wages, access to healthcare & housing, equal opportunity, and more. While EWA was not specifically outlined, it is expected that this kind of pay program will be widely requested – and employers need to prepare for it.

What Hospitality Leaders Need To Know About Earned Wage Access

EWA isn’t just about getting paid. Many employees report feeling more valued by their employers when they have access to their wages when they need them. Companies that offer this kind of financial flexibility have seen increases in employee engagement and satisfaction. A recent Harris Poll survey found that 78% of employees said unrestricted access to on-demand pay would increase their loyalty to an employer & 79% said it would make them feel more valued as an employee.

Payroll professionals must recognize that EWA will be a basic benefits expectation in the very near future, and they would be wise to get ahead of that shift. EWA provides an affordable and flexible option for employees who want to manage their finances and have early enough access to their wages to support themselves and their families. It is a great motivator for employees to join and stay with a company, show up for work consistently and ask for extra shifts, because they know they’ll have money right away. Responsible EWA provides a necessary boost to American hospitality workers.

Tal Clark is the Chief Executive Officer at Instant Financial, where he leads the organizational strategy behind the industry’s leading responsible earned wage access solution. Previous to working at Instant, Clark worked at Money Network as a member of the prepaid card team. In 2008, First Data bought Money Network; from there he continued his career at First Data in various leadership roles through 2018. One of those roles was General Manager of the Money Network business.