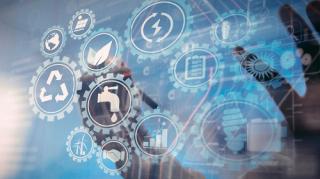 Throughout the Industrial Revolution, people across Europe and the U.S. have slowly transitioned from hand production methods to machines, when they realized the potential benefits – not only would it make things easier and change our lives for the better, but humans could focus on jobs that required higher skillsets.

Operations in conventional restaurants have still not evolved much over the past several decades, including food preparation and the cooking process. Although some appliances have been upgraded to make kitchen work more efficient, most jobs are still done by hand. Why is this, given the possible benefits? Robotic preparation is not only faster and more accurate than human labor, but it’s also more consistent. Productivity during the first hours of a worker’s shift is nowhere near the same as their last – ultimately impacting efficiency and overall food quality. The topic is one of great debate, but as we continue to become familiar with and integrate AI in more areas of life, the benefits will surely outweigh the concerns.

That said, it is important to note the difference between robots and automation as these are not the same – in fact, automation is much more efficient. While robots tend to imitate human behavior and actions, it is a less efficient use of space and time. Humans may make mistakes, reading instructions incorrectly or place ingredients wrong – and not even notice. These issues do not happen with AI inspection equipment, producing superior product.

Further, autonomous kitchens reduce food costs and waste by precisely using only what is needed and accurately dispensing the ingredients to prepare each meal. It’s no secret that when cutting things like vegetables, and placing cheese or other toppings on food, there is a margin of waste around 1-3%. The use of technology, we believe, is helping bring that figure closer to zero. Controlling the environment of food storage containers is also imperative as products like dough and meat change their properties in response to the changes in temperature – possibly altering their food safety state. Monitoring and changing temperatures in sync with real time food sales, something that cannot be done in a traditional restaurant, will also reduce waste.

Safety is another, yet paramount, differentiator for autonomous restaurants over conservative ones.  Cross contamination is the number one concern restaurants face daily. Washing hands after every activity, changing gloves and wearing face coverings and headcovers are tasks that are not required when moving to an autonomous restaurant setup. Personal injury is another real concern that unfortunately is all too real. Collectively, these issues are ones faced by humans so when you remove the challenge from the equation, the result is a continually safe restaurant.

When it comes to the level of cleanliness of a traditional restaurant, it’s hard to believe that a thorough cleaning is top of mind for workers as they often complete this task late at night, at the end of a shift. In contrast, autonomous restaurants clean themselves on a regular schedule – some, every 40 minutes with Ozone water. Moreover, to avoid bacteria from developing, or to keep insects and animals out of the restaurant, ozone air control is imperative to enable such a high level of food consistency.

As we look to the future, autonomation will be integrated into so many sectors of life beyond the food industry – essentially being used for almost any task performed by humans. With technology and processes evolving, food production and restaurant service are just a few areas of implementation for AI. As a result, people will be able to shift their focus and transform their duties, elevating themselves from restaurant workers to AI designers and controllers. This shift is one that should be welcomed by all as the introduction, and the use of AI was never meant to replace the human worker. in the end, the goal is to move humans in roles that showcase the best of their abilities while greatly impacting the bottom line of business. We are just at the beginning of the second world machinery revolution where AI will be an integral part of our lives, making all facets of work more efficient, safer and highly productive. The best, as they say, is yet to come.

Udi Shamai is a restaurant tech entrepreneur with 30-plus years of experience in the restaurant and fast-food industry. Being the owner of Pizza Hut Israel, Udi has first-hand experience in dealing with challenges restaurants frequently face - from labor to food safety - and realized the current situation must change and adapt to the times. As a result, Udi has brought together experts in the fields of food, robotics, mechanics, and more to form a winning team that has been working on Hyper Robotics' brainchild - the first fully autonomous store.