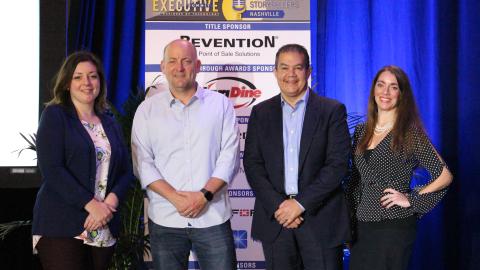 Hospitality Technology (HT) magazine is proud to announce the winners of the 2018 MURTEC Breakthrough Awards. Sponsored by NovaDine, an enterprise-class digital and mobile ordering solution provider to the restaurant industry, the 2018 awards were presented at the MURTEC Executive Summit, taking place October 17-19 at the Omni Hotel in Nashville.

McAlister’s developed an online and mobile engagement platform that allows the brand to offer a seamless mobile and online ordering experience and drive increased customer loyalty and spend through targeted CRM.

“Today’s leaders in the restaurant industry are proving the benefits of putting technology at the forefront of business strategy,” says Dorothy Creamer, editor of Hospitality Technology magazine. “Innovators recognize that augmenting operations with technology yields huge returns. It empowers employees and it provides experiences to guests that will keep them coming back. In these days when options are limitless, the tipping point for restaurants that want to be in business in two years, let alone 20, is how they leverage technology to gain advantage. This year’s honorees are doing just that.”

Breakthrough Awards are presented to select restaurant companies that have demonstrated outstanding vision and achievement in operational and guest-facing technologies. Winning companies are chosen based on vision and execution; consideration is given to size, resources and individual market segment benchmarks to ensure that companies from across the industry are recognized. Nominations were collected in Q3 of 2018 and judged by the HT editorial staff and its Advisory Board on the basis of innovation, thought leadership, execution and results.

“With today’s rapid pace of change, the line between restaurants and tech companies are increasingly blurred and innovation is driving business strategy,” says George Istfan, founder of Raleigh, N.C.-based NovaDine. “As the sponsor for this year’s MURTEC Breakthrough Awards, NovaDine is proud to recognize TGI Fridays and McAlister’s. Both companies are embracing the digital era we find ourselves in and are leading by example in what is possible when you utilize the latest advancements from artificial intelligence to mobility to remove barriers to next-gen service and operations.”

Inside the Winning Solutions

Atlanta-based McAlister’s Deli was honored  for its development of an SEO-optimized, mobile-first website that was designed with calls to action to drive online purchases. The 400-store chain ditched its disparate systems and worked to create one integrated platform, starting with a fully integrated point-of-sale system plus mobile ordering, email marketing, loyalty, intelligent push notifications and analytics.

The integrated online and mobile ordering solution provides a frictionless ordering experience for customers, while the CRM solutions reward McAlister’s best customers and show less loyal customers how much they want their business. Since implementing the revamped online and mobile ordering and CRM solutions, McAlister’s Deli has seen a 189% gain in digital revenue, 2.5x jump in online customers and transactions, and a 200% increase in email open rates. Plus McAlister’s successfully built loyalty with all segments of customers, and unified messaging and offers across the franchise community, while saving time for customers and restaurant team members.

“McAlister’s Deli is proud to be recognized as a 2018 Breakthrough Award Winner. We are always striving to leverage technology to make our customer’s experience better while driving growth for our franchisees,” says Michael Verdesca, Chief Information Officer, McAlister’s Deli.

TGI Fridays, based in Dallas, began exploring the use of Artificial Intelligence (AI) to support key performance indicators across the enterprise in 2017. Machine learning analyzes all of TGI Fridays’ sources of data (POS, social, guest relations, credit card, Foursquare, etc.), empowering the company to create specific and relevant messaging delivered to an individual guest at the right day, time and platform to drive a customer action. As a result of utilizing AI to drive personalized engagement, TGI Fridays doubled its To-Go business in less than six months.

Managers at TGI Fridays use AI-enabled tools to understand and manage guest traffic flow and staffing needs while reducing overtime. These tools have helped restaurant managers and above store leaders to improve throughput by 10%, reduce wait-times by 20% and increase store-level profitability by 5%. Enabling team members to better serve guests through AI-suggested actions has increased guest satisfaction scores by 15% and reduced team member turnover by more than 20%.

“The TGI Fridays team is honored to be recognized for our technology and digital efforts. As we continue to drive innovation through our use of digital, AI and machine learning capabilities, we are truly creating differentiated and personalized experiences for our guests today and into the future. We are extremely grateful for this amazing recognition as it will continue to push us in our mission to become a technology company that happens to sell ribs and beer,” says Sherif Mityas, Chief Experience Officer, TGI Fridays.