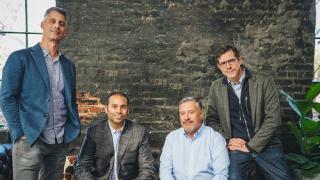 “I am invigorated by the addition of Bob, Mike, and Matt to the Franklin Junction team,” said Franklin Junction’s Co-Founder and CEO, Rishi Nigam.  “They each bring a proven track record of innovation and a wealth of restaurant industry knowledge to our company.  I look forward to working with them as we elevate to the next phase of significant growth and development as we continue to break barriers for our restaurant partners.”

A veteran restaurant, growth, and data technologist, Pascal comes to Franklin Junction most recently from Morsum, the food service data technology company, where he led growth. Before his time at Morsum, Pascal served as Chief Marketing Officer for Sodexo’s global Centerplate brand.  Prior to his time at Sodexo, he held brand marketing and technology consulting positions in the consumer-packaged goods and financial services industries.

A proven culinary, logistics, and operations executive, Pappas joins the company following more than a decade of leading front-of-house, quick-service, and culinary operations as Vice President and Corporate Executive Chef for 26 NASCAR/F1 racetracks throughout the United States, annually serving more than 10 million guests.  Prior to which, he held senior culinary positions at event hospitality giants Aramark and Sodexo, as well as restaurant group Harry’s Seafood of America and Ritz-Carlton hotels.

A technology innovations leader, Maddox most recently served as Head of Technology for Roark Capital, the $33 billion private equity firm with significant food and beverage holdings including recognizable brand names such as Arby’s, Buffalo Wild Wings, Dunkin’, Carl’s Jr and Hardee’s, and The Cheesecake Factory, among others.  Prior to his position at Roark, he served as CIO of Old Republic Aerospace and as a senior technology project leader for AIG.  He holds a BBA in MIS from the University of Georgia’s Terry College of Business and currently serves on various technology advisory boards including Atlanta Technology Professionals and at the University of Georgia.