Beyond the Hype: CBRS Explained

Beyond the Hype: CBRS Explained

In 2015, the Federal Communications Commission (FCC) authorized the use of Citizens Broadband Radio Service (CBRS), the 3.5 GHz band (3550 MHz to 3700 MHz) for shared wireless access. Prior to this, the 3.5 GHz band was exclusively used by the U.S. government and a few other incumbent services. Although the government is now allowing this spectrum to be used for new commercial purposes, it is requiring that the spectrum be regulated via a dynamic coordination process. This means that individuals or businesses must request and be assigned a band by a Spectrum Access System (SAS). Before authorizing a request, the SAS will determine channel availability at the given location.

First it will search for Tier 1 protected incumbents including the military, fixed satellite service options and fixed wireless services which are given priority in any given geographic area, says David Wright, president of CBRS Alliance, member of the Dynamic Spectrum Alliance and director, regulatory affairs & network standards at Ruckus Networks. Then the SAS will look for Tier 2 or Priority Access Licenses. These are organizations that have purchased the right to have exclusive use of a small portion of the spectrum band in a specific geography. Any spectrum not used by Tier 1 or Tier 2 is available for general authorized use.

“Tier 3 is operationally analogous to unlicensed spectrum,” Wright says. “We largely expect hoteliers to leverage the low cost of access at Tier 3.”

WHAT ARE THE BENEFITS?

According to Patrick Dunphy, CIO at HTNG, CBRS enabled infrastructure will provide additional capabilities, bandwidth and spectrum to hospitality companies, both in private (venue only) and public (broad cellular network access) scenarios. Private deployments will enable staff-based communications access with less infrastructure density than typical WiFi deployments, and enable cellular-like roaming within the property itself.

Private LTE networks could even be used as a new option for IoT connectivity. According to Wright, the predictability, security and range of a private LTE network in the CBRS band is often better than wireless solutions relying on fully unlicensed spectrum.

When hotels have a more predictable network, they may consider using more IoT technologies. Art King, in-building technology marketing, Corning Optical Communications; and member, Marketing Workgroup, CBRS Alliance; and co-chair, Business Principles Working Group, Small Cell Forum; predicts that many wired aspects of a hotel room — such as the guestroom phone — could eventually become wireless. This could free up a lot of space that is currently dedicated to wires and cabling for hotel network infrastructure.

“For large businesses that require closed or private enterprise wireless networks, LTE networking technology is more secure than WiFi and helps reduce the risk of a cyberattack or data breach,” he notes. “By deploying a private LTE network based on the 3.5 GHz band, hotels have complete power over network access, thus controlling security and ensuring that data doesn’t leave the premises.”

“Many commercial buildings use modern materials like Low-E glass, which are good for saving energy, but bad for cellular signal propagation,” Ewing says. “And while hotels can work with a mobile operator to install a distributed antenna system (DAS) to compensate for coverage gaps, the initial investment often doesn’t make financial sense. With infrastructure such as OnGo — private LTE networks built to run on the 3.5 GHz CBRS band — building owners and property managers can run their own in-building networks using standard 4G LTE cellular technology on the CBRS band using carrier-agnostic connectivity that covers the entirety of the hotel’s property.”

While public deployments are potentially the most appealing aspect of CBRS, it might also be the “Holy Grail” that never comes to fruition. Hotels or their partners will still need to negotiate broad public access with major service providers like AT&T, Verizon, T-Mobile and others to connect guests to the cellular network, Dunphy says.

HOW IS IT DEPLOYED?

According to Wright, hotels should be able to deploy CBRS-enabled LTE small cells within a hotel property with the simplicity and cost model similar to WiFi. Ruckus, for instance, is creating a 3.5 GHz LTE module that connects to its existing WiFi access points and will provide a CBRS radio within that WiFi platform.

“Every third or fourth access point could theoretically have this module attached to it which would create this strong, pervasive radio signal for guest to connect to with their smartphones,” he explains.

Ewing agrees that CBRS will work within the existing infrastructure that most hotels already have at a reasonable price point.

“Hotels can build a network that does not interfere with an operator’s macro network,” he says. “Hotels can build and operate an on-premises network at a lower cost than an operator because it has access to its own property and can leverage existing telecom infrastructure. Private LTE networks based on the 3.5 GHz band are mobile carrier-agnostic and are cheaper to deploy than DAS or even WiFi. In some cases it requires fewer access points than WiFi.”

WHEN WILL IT BECOME WIDELY AVAILABLE?

Dunphy believes that CBRS will have widespread availability in the general market by late 2019 or early 2020 and will begin to deploy within the hospitality industry sometime thereafter.

According to Wright, however, a lot of the timing of CBRS’ rollout is tied to the government and its approval process of the various pieces of its infrastructure. In September 2018, the FCC started infrastructure equipment authorizations including access points and small cells. In late December, the government also began to authorize client devices for CBRS.

The government began testing the SASs in May 2018 but as of January 2019 had not yet certified or approved them — partially due to the government shutdown, which delayed testing. Wright believes that the SASs will be approved shortly. Once that approval comes through, “We’re optimistic we’ll get into commercial service within the first half of this year,” Wright said.

Others within the industry feel overall public usability might take even longer. For instance, King points out the fact that the only mobile phone available on the market right now that can connect to CBRS radio signals is the Google Pixel 3. With many makes and models of phones costing around $1k, it could be about three years before a large enough number of consumers are carrying CBRS-enabled smartphones for it to make sense for hospitality to install the infrastructure. For private LTE applications where the hotel is using the system for internal operations, they could choose to acquire CBRS capable phones along with the infrastructure and be in service much earlier than the general public.

A WORD OF ADVICE

As with all new technologies, the possibilities of CBRS are very appealing for the hospitality industry. However, hoteliers that are considering adopting this technology should follow the prudent course of “look before you leap,” says King. One way to accomplish this easily would be to build a prototype in your headquarters, live on it for some time, and run the necessary operational trials. Learn its benefits and limitations before planning a mass rollout to all of your properties or recommending it to franchise owners. 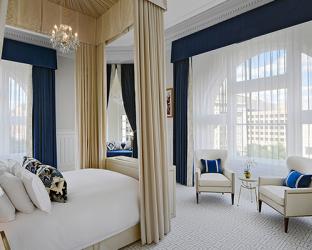