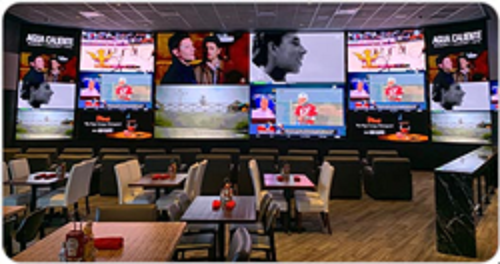 Owned by the Agua Caliente Band of Cahuilla Indians, the casino resort and spa added 360 Sports late last year. Sports betting is not yet legal in California so 360 Sports debuted as a sports bar and restaurant with a variety of real-time programming and custom video options for its patrons.

360 Sports boasts 2,300 square feet of LED displays comprising a main LED wall, an LED bar back, a “Dogbone” LED wall and an entry LED wall, which surround comfortable table and bar seating. The video walls are fed by 19 DirecTV boxes for sports programming and 12 proprietary media players for Agua Caliente’s own media and marketing content.

Another major factor in choosing the X80 multiviewer was its HDCP 2.2 compliance, which is required to process encrypted programming content.

A simple user interface makes it easy for bartenders and managers to leverage Spyder’s API for command and control. Accessing pre-sets to change the looks on all the LED displays is achieved with just a button push.