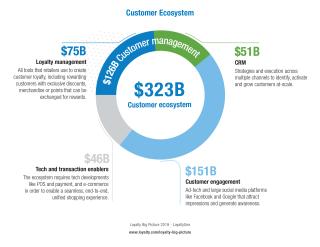 Customer loyalty is big business and getting bigger. The new research report “Loyalty Big Picture,”from LoyaltyOne found that the total 2019 customer ecosystem is a whopping $323 billion. That loyalty landscape includes $126 billion in direct loyalty and customer relationship management, along with significant investment in technology and transaction enablers and customer engagement platforms.

And the loyalty industry is growing: 69 percent of C-suite executives reported that they’ve increased loyalty investment in the past two years, with more than half (55 percent) saying their investments will continue to grow over the next two years.

Increasingly, the value of loyalty and the insights garnered from customer loyalty strategy are influencing decisions across organizations. In fact, while there might be a public perception that loyalty cards’ usage is waning, the opposite is true – their popularity is exploding.

Companies are recognizing the value of using customer data for everything from product development and pricing optimization to real estate planning and even media. More than half of companies (61 percent) said they use loyalty data across at least three different departments, and a mere 2 percent of industry practitioners surveyed reported that loyalty data is used strictly by traditional departments like marketing and public relations.

In short: Loyalty matters more than ever to companies across industries, especially in highly consumer-driven areas such as retail, financial services and hospitality. Facing increasing competition and shrinking budgets, they’re relying on loyalty’s data collection, insights and rewards to unify end-to-end customer management and all the ways to activate customers and shape their behavior.

To that end, companies are putting significant money behind their loyalty efforts: More than 71 percent said they’re investing a minimum of 2 percent of total revenues, with most spending upward of 4 percent, for loyalty and CRM to activate customers and leverage the data asset to create personalized offers and extensions, according to “Loyalty Big Picture.”

What are they getting for that investment? There’s good news on that front: The research found that loyalty program members contribute to almost half (43 percent) of companies’ annual sales. A full 95 percent of companies reported that members spend more than non-members annually, with 60 percent reporting that members spend two to three times more than non-members. As evidence of just how valuable the ROI can be, a significant number of vendors and other third parties are willing to pay for participation in programs. Indeed, more than half (53 percent) of loyalty practitioners surveyed for “Loyalty Big Picture” reported that vendors or other third parties fund offers for their loyalty programs.

Plenty of Opportunity for Change

“Loyalty Big Picture” unveils plenty of opportunities for retailers and other program operators to better capitalize on their investment. One such area: consideration of fee-based programs.

More than three-fourths of consumers (76 percent) reported that they do not pay a fee for the loyalty programs in which they participate, but 64 percent would be willing to do so in exchange for additional benefits including discounts, expedited free shipping and better earn rates. To that end, more than half of companies surveyed reported that they are considering implementing fee-based programs.

Another area of opportunity: Only 30 percent of companies cited “increase the value provided to loyalty members” as a reason they increased their loyalty investment in the past two years. Many loyalty operators fail to fully dig into the data that loyalty programs collect and realize all the benefits.

“The fact is, many loyalty operators benchmark against the competition and take their lead from market forces, not realizing that demand is being shaped by their customer,” said Papadatos.

Decision-makers, loyalty program operators, C-suite executives, industry analysts and others can download “Loyalty Big Picture” for a deeper look at the insights above as well as other key findings, including: