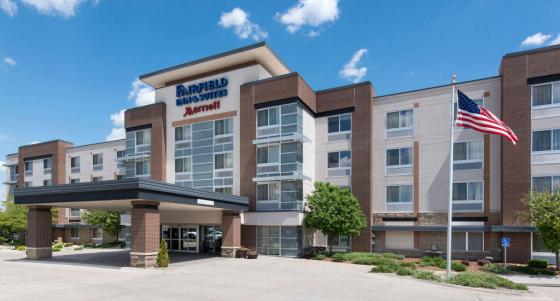 Recently, Scarlett Hotel Group, owner and manager of the Marriott Fairfield Inn & Suites Omaha Downtown in Nebraska, announced the closing of its in-house airport shuttle service. For an airport hotel, this may seem quite unusual. But the Scarlett Hotel Group was not about to leave guests out in the cold. The hotel replaced its shuttle service with a program from Uber Central, part of Uber for Business, to offer guests free Uber rides to and from Eppley Airfield.

Why would a hotel voluntarily shut down its shuttle service?

"We're in the hotel business, not the transportation business," said Zio Pekovic, principal and co-founder of the Scarlett Hotel Group.

This was especially evident when the Scarlett Hotel Group realized how much running an airport shuttle was costing the hotel. The shuttle would run from about 5am to 10pm every day and would on high volume days make approximately 20 trips per day. When the hotel tallied the cost for the vehicle's lease, gasoline, insurance, chauffeur salary and maintenance, it found that the hotel was spending approximately $175k per year, Pekovic added.

Additionally, the guest experience with the hotel shuttle wasn't always the best. Sometimes guests would have to wait 30 or 40 minutes for the shuttle to arrive, especially if it was already making another trip. On top of that, Omaha, Nebraska averages the mid-80s in the summer and mid-30s in the winter, adding an extra layer of inconvenience to the guest experience of waiting for the shuttle.

So why Uber out of all the ride-share companies?

"We decided to take the jump because we've always had good experiences with Uber," said Rob Sadoff, principal and co-founder, Scarlett Hotel Group. "Plus, we figured that it would help minimize wait times for guests and could provide some money saving opportunities."

Scarlett Hotel Group's instincts were right. After partnering with Uber, it noticed significant cost savings. The hotel now only pays $50-60k per year to transport guests from the airport to the hotel -- a cost savings of approximately  $115k per year.

Best of all, guest surveys have revealed a major improvement in guest satisfaction. According to Pekovic, guest satisfaction surveys have seen an increase from 68% to 78% year-over-year in intent to recommend. Similarly the check-in experience has also improved 20% year-over-year. When asked why they are so much happier with the hotel, guests often state that the transportation to and from the airport exceeded their expectations.

One reason for this could be that the hotel worked very hard with Uber to create a user experience that even the least tech savvy individual could appreciate and easily use.

"One of the concerns we had early on was – even though we like technology and embrace it -- we didn't want less tech savvy guests to feel ostracized because they didn't use Uber on their phone or know how it works," Pekovic noted. 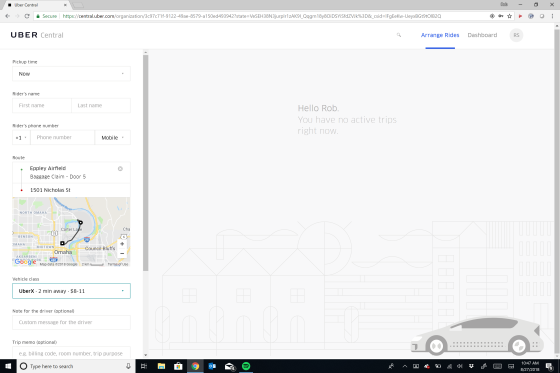 What the Uber Central dashboard looks like to front desk staff before requesting a ride for guests.

When a guest lands at the airport and calls the hotel for the shuttle, the front desk staff uses to the Uber Central dashboard to send an Uber their way. The guest meanwhile receives a text message containing a link. When clicked on, the link provides the guest with the driver’s name, car make and model and license plate.

As the guest rides to the hotel, the front desk staff are able to track the guest's approximate arrival time allowing them to greet the guest by name when they walk in the front door.

"It's a much more personalized experience," Pekovic said. "We're trying to be trailblazers when it comes to marrying technology with old fashioned hotel service."

The hotel can also schedule a future Uber ride for guests who are at the hotel and have an upcoming flight or for guests who call ahead to let the hotel know when they will be arriving and will need a ride, Sadoff said. For guests who aren't sure exactly when they will need an Uber, the Central dashboard allows the hotel a "flexible" option. The guest is sent a text with a link in it and they click on it whenever they need a ride and the Uber arrives in about five minutes. The link is usually good for about 12 hours.

While hotel staff and guests are loving the hotel's transition to Uber now, it did come with a bit of a learning curve.

"It took us some time to work through the logistics," Sadoff noted. "When consumers are used to a certain way and you give them something different – there can be challenges. For example, we have a lot of airline crews that stay at the hotel and if they land at 4am it can be difficult to get an Uber at times. It took some training to get the front desk engaged and the guests engaged. It was a learning curve, but we got through it."

Obviously, the reward has been worth the effort.