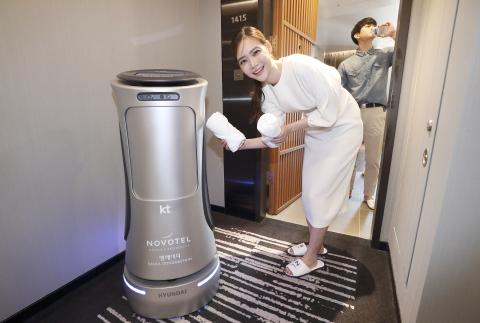 KT will seek to further commercialize opportunities through its AI robots and to expand their usage to other industries. It expects users will especially appreciate the robots amid efforts to reduce in-person service contact during the COVID-19 pandemic.

KT's head of AI business Kim Chae-Hee said, "KT will try to help our customers enjoy greater convenience in their everyday lives by applying AI robot services in a wider variety of areas beyond hotels, including food and beverages and office operations."

Linked to an AI speaker, N Bot is capable of seamless service to local and foreign guests, from order to delivery. Currently, user interface is available in Korean, English and Chinese. Application in other languages is also possible.

N Bot's design is upgraded to slimmer and more streamlined than the first-generation robot. The delivery capsule is 1.5 times larger so that it could carry deliveries more efficiently. The motor and wheels have also been improved, increasing the robot's speed by 40 percent and its maneuverability around obstacles. Also, the battery lifespan is 30 percent longer than the previous version.

The first-generation GiGA Genie hotel robot has been in service at Novotel Ambassador Dongdaemun for six months and made deliveries to its 211 rooms. Bottled water was the most frequent delivery request between 10 p.m. and 7 a.m., followed by towels, slippers, tooth brushes, shampoos and body cleansers. Most of those deliveries were before midnight with guests saying they appreciated avoiding in-person room service late at night.