Robots in Hospitality: Five Trends on the Horizon

Robots in Hospitality: Five Trends on the Horizon

04/04/2017
Get great content like this right in your inbox.
Subscribe
There’s no denying it: robots are becoming common helpers in hospitality, showing up in hotels and restaurants around the world. From Japan’s all-robot hotel, to Hilton’s robot concierge, to Savioke’s autonomous delivery robot, Relay, robots that serve hotel staff and guests are a growing trend. Robots are proving their value in restaurants, too, preparing meals, taking orders and even delivering food.

Hospitality robots are clearly at a tipping point. They’re now cost-effective to build, are attaining cultural acceptance, and use sophisticated technology to safely live and work among us. But what’s next in this fast-moving field? In this article, Savioke discusses five key robot trends set to emerge in the hospitality sector.


With hospitality leading in robot adoption, millions of people staying in hotels and eating in restaurants will soon come into contact with them. And we’ll soon see robots appear in other human environments such as stores, apartment buildings, and hospitals. Acceptance will happen quickly – just as people embraced smartphones seemingly overnight – ensuring that robots move from being novelties to useful, everyday helpers. 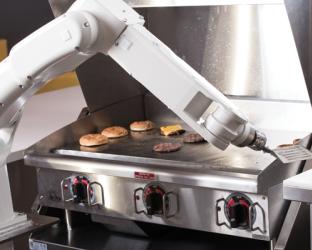