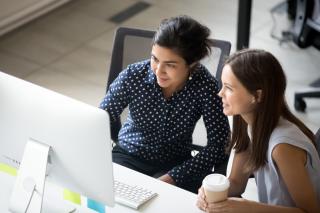 SynED, a national non-profit focused on education, released Agents of Change Volume 4: How a New Apprenticeship Model May Finally Bridge the Tech Hiring Gap, the fourth in a series of reports that provide a roadmap on how individuals, organizations and communities address challenges in our education and workforce training systems and take action.

“This series is designed to inspire and guide those who want to improve the process of connecting trained individuals to the employers who need them. Each story is presented as a how-to guide clearly identifying the critical components of successful innovation approaches, and provides practitioners and policymakers alike useful insights and tools they can leverage to realize success in their own communities,” said Scott Young, President and Executive Director, SynED. “This volume, highlighting Apprenti, provides an in-depth playbook for how communities can adapt old apprenticeship models to accommodate the demands of new technology careers.”

Volume 4 of Agents of Change is centered on a promising new approach to finding and developing diverse tech talent. Data shows that hundreds of thousands of tech job openings are going unfilled each year in the United States, while frustratingly slow progress is being made on the tech industry’s lack of diversity.

The example of Apprenti, a national nonprofit, shows how the apprenticeship model can be adapted to tech jobs in a way that provides confidence to workers and employers alike, while supplying a pipeline of diverse candidates from underrepresented populations. Partners have called the approach “overwhelmingly positive” and “wildly successful,” and evidence shows that the vast majority of apprentices are retained by their employers.

Despite a challenging policy and funding landscape, Apprenti continues to expand across the United States. With a sustainable business model and evidence that their approach works for companies – much of their growth can be attributed to word of mouth, as executives and hiring managers share their successful experiences with retaining apprentices – the Federal government has begun to recognize the benefit of investing in their expansion. The U.S. Department of Commerce’s Economic Development Administration recently awarded Apprenti $23.5 million through the Good Jobs Challenge to expand their work.

“Apprenti is making the apprenticeship model more approachable for companies, because they’re coming in saying ‘this is a proven model, we know it works.’ And they’re making it easier for the apprentices too,” said Christina Misali, Director of Talent Pipeline for the Cincinnati Chamber.

This volume of Agents of Change reveals what makes Apprenti’s approach successful, from its flexibility for employers to its breaking down of barriers for underrepresented populations. The traditional apprenticeship model involves an apprentice shadowing an employee for months before doing any work. This is called “watch and learn.” Classroom instruction is a common feature, and the length of apprenticeships can be up to five years. The technology involved in tech jobs makes this impractical, if not impossible.

“Plumbing went from galvanized, to copper, to PVC over 80 years,” Jennifer Carlson, Co-Founder and Executive Director of Apprenti, said. “We in tech have changed languages three times in the last five years.”

After exhaustive outreach to employers and experimentation with different models, Apprenti and its partners landed on the broad outlines of an approach that works for tech jobs. The model is flexible and adaptable to individual employers’ needs, and includes intensive instruction and certification at the start, and accelerated “watching and learning” with a typical overall duration of only one year.

It still includes the traditional and beneficial aspects of apprenticeship: commitment to the apprentices shown by employers, no cost for the apprentices themselves – and pay during the apprenticeship – and reassuring data that almost all apprentices end up securing better paying, fulfilling jobs at the end of the process. Apprenti is a close partner with employers throughout the process, taking much of the paperwork and other burdens off the employer, making it easier for them to commit.

“What we were really drawn to was how Apprenti was able to be so successful in these other markets across the country, partnering with local organizations to make it valuable to the tech industry in those areas,” said Erin Christensen, Chief Operating Officer of KC (Kansas City) Tech Council. “What might work in one part of the country may not necessarily work here in Kansas City. That’s what was so attractive to us – how flexible the program is, not only with the markets that Apprenti operates in, but also the kinds of companies that they work with. It’s not just enterprise-level tech companies, there are probably more non-tech companies participating than tech companies. Every company has tech needs.”

“I think this system definitely worked,” Paolo Cani, a recent apprentice in the program, shared. “I was able to double my salary in one year and my job now is much better than the job I had before. This is just the beginning of my career and it has really set the stage, I think, for what can happen next.”