Culinary on demand startup Kitchen United announced that Meredith Sandland will join the company as Chief Operating Officer, effective March 5. Sandland most recently served as Chief Development Officer for Taco Bell, a division of Yum! Brands with 7,000 locations and $10 billion in system sales. In this role, she added more than $1 billion in sales to the system through the addition of 1,000 restaurants in just four years. Sandland will be responsible for driving revenue and overseeing Kitchen United's business strategy, operations and national rollout plan.

"I'm incredibly excited to welcome Meredith to Kitchen United's leadership team. She embodies the strong business instincts, deep knowledge of the industry, extensive leadership and passion that will drive our mission forward," said Kitchen United CEO Jim Collins. "We have ambitious goals for 2018, and the addition of Meredith will enable us to help restaurant operators and independent food professionals expand their footprint and integrate seamlessly with delivery operations by using our turnkey back of house infrastructure."

"I am thrilled to join Kitchen United at this pivotal time in the evolving restaurant industry landscape," said Kitchen United Chief Operating Officer Meredith Sandland. "I have tremendous respect for Kitchen United's powerful mission to help restaurants thrive with off-premise dining and will focus on delivering value for our existing partners, attracting new ones and growing our brand."

Kitchen United was spun out of Cali Group, the holding company behind Miso Robotics' burger-flipping robot, Flippy, and the first application of facial recognition technology in U.S. restaurants that allows consumers to pay with just their faces, who invested in both rounds of the company's financing. Last month, Kitchen United introduced its new center of culinary imagination and excellence with the opening of its first facility in Pasadena, Calif. The 12,000 sq. ft. fully equipped kitchen space leverages technology, including integrated point of sale software, back of house automation, and efficient order interfaces that combine inbounds from various delivery platforms, to enable new levels of efficiency for food businesses. The facility will be used by regional and national food and restaurant brands to produce fresh food solely for the purpose of takeout, catering and delivery.

Kitchen United also provides kitchen space that can be rented by the hour to food truck operators and catering firms in need of licensed preparation space, as well as by entrepreneurs seeking to develop new food products or restaurant concepts. 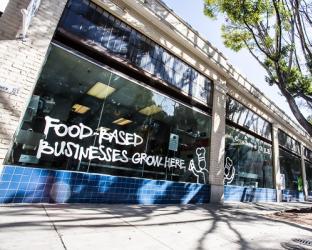