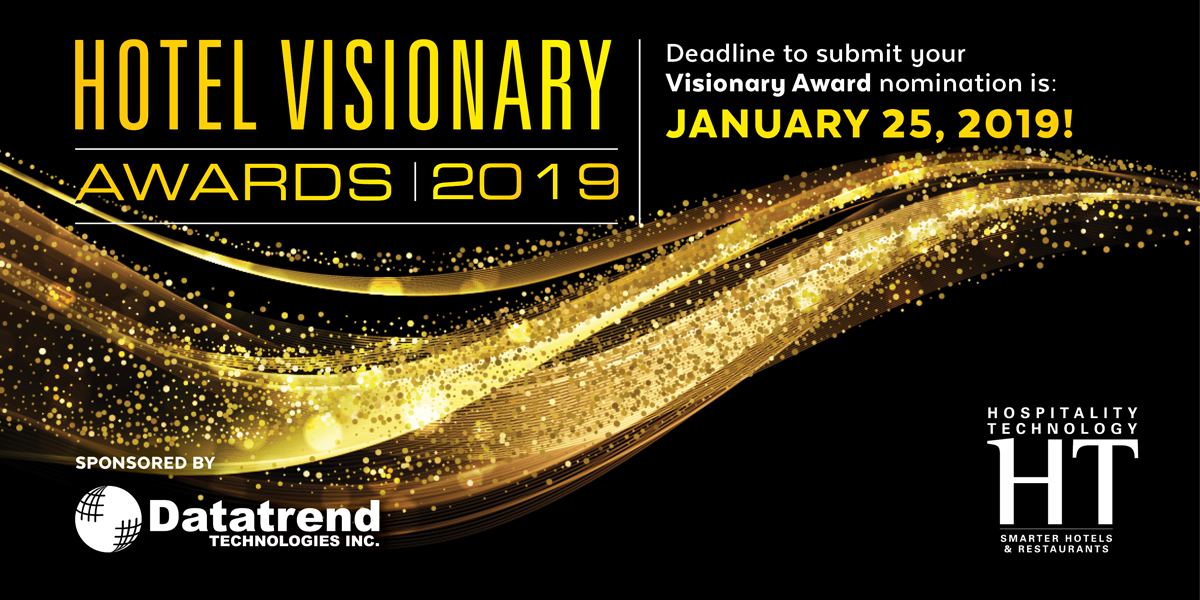 Hospitality Technology (HT) magazine is pleased to announce it is now accepting nominations for the 2019 Visionary Awards. The Visionary Awards, being underwritten by Datatrend as part of the HT-NEXT Awards program also including the TechOvation awards, seeks to honor hotel companies for outstanding achievement, vision and leadership in technological innovation. The submission deadline is January 25, 2019.

To nominate a hotel company, please fill out this submission form no later than January 25, 2019.

“Authenticity powered and enabled by innovation is driving the most successful players in all industries and the hospitality space is perfectly poised to be leaders in this arena,” says Dorothy Creamer, editor, Hospitality Technology magazine. “The Hotel Visionary Awards seek to honor hotel companies that successfully leverage high-tech innovations for a high-touch success story from guest-facing to employee-facing initiatives. As always, we anticipate that this year’s group of nominees will be a great source of inspiration and remind us how the hotel industry is the proving ground for the vast potential of technology to provide customized experiences for both guests and employees.”

The Customer-Facing Innovator award is presented to a hotel company that has leveraged customer-facing technology innovations to differentiate and/or improve customer service. Results should reveal an increase in guest service, satisfaction or loyalty, and/or brand reputation. Technologies can include, but are not limited to, all hardware and software solutions that have a customer touch-point, such as televisions, kiosks, display boards, mobile phone apps, guest room technologies, etc.

The Enterprise Innovator award is given to a hotel company that has leveraged technology beyond standard practices to improve overall hotel operations. Results should reveal an increase in efficiency and/or cost savings. Technologies can include: PMS, revenue management, bookings, CRM, infrastructure/networking, and all those applications and hardware solutions that empower back-of-house operations.

“Datatrend Technologies is proud to sponsor the HT-NEXT Awards program, including the Hotel Visionary Awards for the third consecutive year,” says Rob Graves, Vice President. “Sponsoring these awards is important to Datatrend, as our mission is to help organizations continually leverage technology. We do this to better users’ experiences, as well as enhance business outcomes along the hospitality digital transformation journey. We’re looking forward to working closely with this year’s candidates in advancing hospitality technology innovation.”

To nominate a company, please fill out the submission form no later than January 25, 2019. Winners shall be notified on or about February 15, 2019 and awards will be presented live at HT-NEXT at the Hilton New Orleans Riverside Hotel in New Orleans, La., on Wednesday, April 10, 2019. Technology vendors are encouraged to nominate hotel companies, but are not themselves eligible to receive an award.

HT-NEXT will take place April 8-11, 2019 at the New Orleans Riverside Hotel in New Orleans, La. HT-NEXT is the first industry-leading event uniting HT’s Hotel Technology Forum and HTNG’s North American into one immersive networking and educational event for hotel executives and solution providers. Honorees will also be profiled in the cover story of the June 2019 issue of Hospitality Technology magazine.

Past Visionary Award Winners Include:

EnsembleIQ is a portfolio company of RFE Investment Partners, a private equity investor with more than 30 years of experience investing in growth companies in partnership with strong management teams. Visit http://www.rfeip.com.