Now in its 13th year, the MURTEC Breakthrough Awards will be presented at the MURTEC Executive Summit, a sister event to MURTEC (Multi-Unit Restaurant Technology Conference). 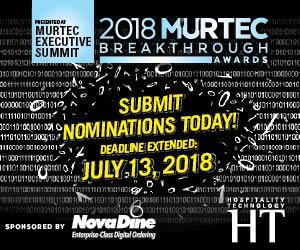 Nominations for the MURTEC Breakthrough Awards are being accepted through July 13.

“Technological innovation has always been a central component of the Breakthrough Awards,” Dorothy Creamer, editor of Hospitality Technology magazine, explains. “This year’s MURTEC Executive Summit with the tagline, ‘Technology Storytellers,’ we’re emphasizing how forward-looking restaurant companies are increasingly using technology to build an ongoing dialogue with guests and staff inside and outside of the physical restaurant. Companies that do so are better positioned for future growth as the world changes and customer and employee expectations shift.”

The submission deadline is JULY 13. MURTEC Breakthrough Awards are given in two categories:

To nominate a company, please fill out the nomination form here  no later July 13, 2018. Winners shall be notified on or about July 31, 2018, and awards will be presented at the MURTEC Executive Summit on October 17, 2018. Technology vendors are encouraged to nominate restaurant companies, but are not themselves eligible to receive an award.

“We’re now at a time when the customer experience is intertwined with, and can be enhanced by, technology — when great service is a mixture of personal attention, convenient and user-friendly digital tools, and rich data intelligence,” said George Istfan, founder of the Raleigh, N.C.-based NovaDine. “It’s thrilling to see how restaurants are getting creative in areas across both front and back-of-house operations, and we’re excited and honored to once again be the sponsor of this year’s MURTEC Breakthrough Awards program. I look forward to seeing the winners take the stage live at the MURTEC Executive Summit this fall.”

The MURTEC Executive Summit, held October 17-19, 2018, in Nashville, Tenn., is produced by Hospitality Technology, and is a sister event to MURTEC (Multi-Unit Restaurant Technology Conference). The Summit is an intimate gathering of senior-level executives, unique from other technology events in the industry. The format and content is designed to draw in technology thought leaders and influencers in a program that prioritizes group discussions, two-way dialogue, and collaboration amongst both peers and sponsors.

Past HT Breakthrough Award Winners Include:

About NovaDine
NovaDine provides enterprise-class POS integrated digital and mobile ordering solutions to multi-unit restaurant operators. Multiple prominent chain restaurants like Panda Express, Pollo Tropical and Taco Bueno have deployed the feature-rich turn-key solution to support their online and mobile ordering since the company's founding in 2007.  To date, more than 25 million orders have been processed for clients, across multiple continents, in multiple languages. NovaDine is an innovator in the market place with unique features like its patented Group Ordering; the recently introduced full menu/order/POS integration with Grubhub; and Delivery As A Service integration with Grubhub, UberRush, Postmates and DoorDash.  For more information, visit www.novadine.com.