Hapi, a data streaming, integration and enrichment platform designed to accelerate technology innovation in hospitality, announced the winner of its special Hapi Sponsorship Challenge at the inaugural Hospitality Technology Next Generation (HTNG) "Hack the Night" Hackathon. The Hapi team took part as a Diamond Sponsor of the weekend event, which was held January 25-27 at the Plug and Play Tech Center in Sunnyvale, CA and attracted nearly 60 hackers, including graduate students and professional developers.

After successfully meeting the challenge to create a technology solution that incorporates the Hapi platform in the most creative way, Team Yosemite was awarded their choice of $750 or a drone for their "Taylor Made Holidays" app. The special award was presented by Luis Segredo, president and CEO of Data Travel, LLC, the developer of the Hapi platform.

Segredo served as a judge in the main competition as well, for which Team Yosemite was also the second runner up, claiming another $500 prize. Team HM took home the $1,500 first runner up award for their "Check-in Before You Check-in" app and Team Seena captured the Grand prize of $3,000 for the "Event Leaf" app. Oracle Hospitality also awarded Team No Sleep a special prize for the "Ribbon" app.

Hapi joined title sponsor Oracle Hospitality and co-sponsor POYNT in providing the API and building blocks for Hackathon participants, who worked throughout the night in a fast-paced team development competition to create state-of-the-art prototypes that have the most potential to provide innovation in the hospitality industry

Competition entries were judged on the potential impact that submissions could have on the hotel guest journey and how likely a forward-thinking hospitality company would be to adopt such a solution at scale. Solutions were also evaluated based on API usage, as well as HTNG standards adoption. In addition to the main prizes, Hapi upped the ante by presenting a special sponsorship challenge to participants. 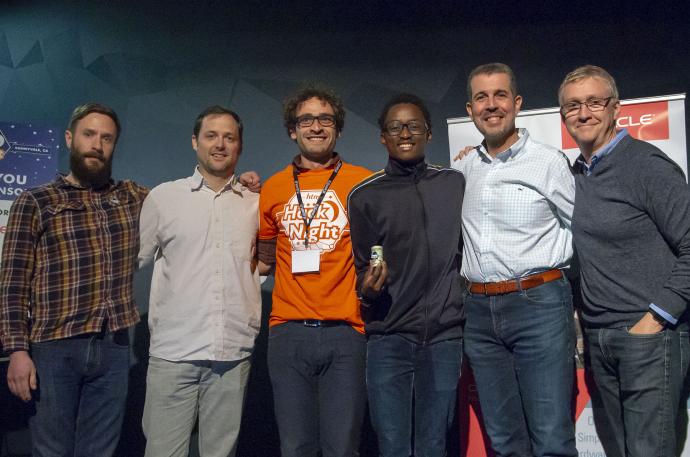 Team Yosemite met the challenge to create a technology solution that incorporates the Hapi platform in the most creative way.