Customer Satisfaction in Airlines and Travel Websites on the Rise, While Hotels Lose Ground

Customer Satisfaction in Airlines and Travel Websites on the Rise, While Hotels Lose Ground 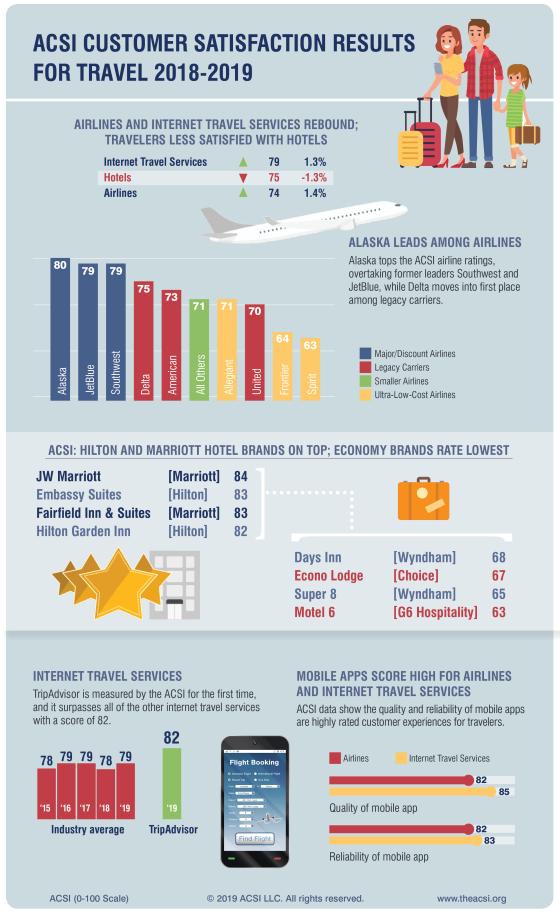 Domestic travel is on the rise and it appears that most travelers are satisfied with their experiences.

This year, there is considerable improvement for several airlines: Alaska, Delta, United, Frontier, and Spirit.

“Airlines sat at a near-record low of 62 just a dozen years ago,” says David VanAmburg, Managing Director at the ACSI. “Now they’re among some of the most improved industries over that time.”

Alaska becomes the new leader with a 1% gain to an ACSI score of 80. The airline’s merger with Virgin America has paid off, according to passengers who now enjoy an expanded network and lower fares.

Delta also rises 1% to an ACSI score of 75, making it number one among legacy airlines. Passengers enjoy the airline’s many in-flight amenities, including seatback screens, USB ports, and Wi-Fi. “Delta also has plans to improve its mobile app by offering miles as currency,” says VanAmburg. “This will enable its members to upgrade through the app.”

However, not all airlines fared well. After leading a year ago, Southwest dips 1% to 79, tying with JetBlue, which remains unchanged.

Southwest has more Boeing 737 Max models than any other airline, leaving it susceptible to safety concerns after Ethiopian Airlines and Air Lion each experienced a deadly crash of that aircraft. Around 9,400 Southwest flights were canceled the first quarter of this year because of safety concerns and/or bad weather.

American Airlines drops below the industry average to 73 after a 1% drop. Allegiant suffers the biggest decline, dropping 4% to 71. Despite a 4% leap, United sits in the bottom three with a score of 70, only besting Frontier (64) and Spirit (63), which see 3% and 2% climbs, respectively.

Three areas of air travel show improvement this year: boarding experience (79), call center satisfaction (78), and the range of flight schedules (77). But the highest score goes to mobile apps at 82, which the ACSI measures for the first time this year, matching ease of check in.

The ACSI includes other new metrics as well – cleanliness, overhead storage, complimentary and ‘premium’ food, and in-flight entertainment – to track some of the most problematic aspects of air travel.

While passengers are reasonably satisfied with cabin cleanliness (78), they are unhappy with the availability and size of overhead storage, as well as complimentary and ‘premium’ purchased food (73 each). There is room for improvement with in-flight entertainment (71), but the worst part of flying remains seat comfort (69), as limited leg room irks passengers.

Hilton and Marriott are home to top brands

Guest satisfaction with hotels drops 1.3% to an ACSI score of 75. Thanks to a rise in online brokers like Airbnb, travelers have more choices and traditional hotels are struggling to keep up.

“This is a transforming industry,” says VanAmburg. “If corporate hotels aren’t able to step up, they’re going to continue to slide.”

Hilton leads with an ACSI score of 80 despite falling 2% to a first-place tie with Marriott (down 1%). The two hoteliers still offer more upscale and luxury properties, better guest service, and higher-quality amenities than other hotel brands.

Hotels have deteriorated in almost every aspect according to guests. It’s still easy to make a reservation and check in (each at 84), yet both scores are down from the previous year. Staff is less courteous and helpful (82), room quality worsens (81), and call center satisfaction, which experiences the biggest drop, plummets 6% to 78 – the same mark as quality of in-room amenities, a new ACSI benchmark.

Resolving complaints is increasingly important. Social media allows guests to relay glitches to the hotel and to the online community, so hotels need to adapt accordingly.

TripAdvisor leads with an ACSI score of 82 thanks to its reputation as a trusted source of user-generated reviews. Expedia’s Orbitz comes in second place at 81, unchanged from last year.

Travelocity (owned by Expedia) takes the biggest hit in the category, plunging 4% to 77. Priceline finishes at the bottom following a 3% skid to 76.

According to users, travel website mobile apps eclipse airlines with an ACSI score of 85 for quality and 83 for reliability. Customers continue to find it easy to make bookings and payments (84) on travel websites. Ease of navigation and site performance are up as well (both 82).

In the end, only loyalty programs (74) and user-generated reviews (75) see a decline for the category.

The ACSI Travel Report 2018-2019 on airlines, hotels, and internet travel services is based on interviews with 12,873 customers, chosen at random and contacted via email between April 5, 2018, and March 27, 2019. Download the full Travel Report.

No advertising or other promotional use can be made of the data and information in this release without the express prior written consent of ACSI LLC. 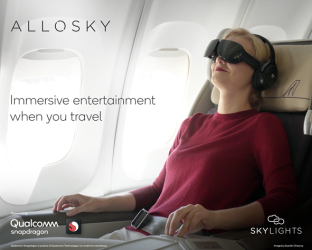 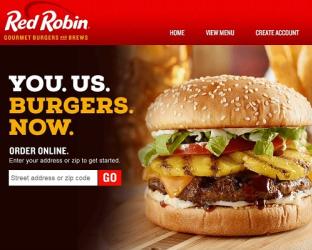 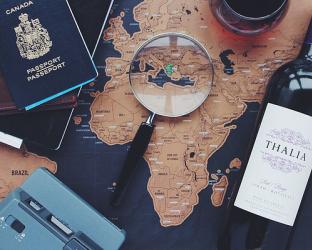