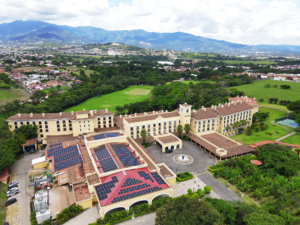 CPG Hospitality and Enjoy Group, owners of Costa Rica Marriott Hacienda Belén, today announced the hotel is installing a microgrid controlled, optimized, and managed by Heila Technologies, representing the first of the Marriott chain in Latin America to deploy the technology. The microgrid will allow the hotel to avoid 20.8 tons of CO2 per year, reduce electricity consumption, have energy coverage, and increase resilience against electrical outages.

[In 2018, High Hotels unveiled a 2,700-panel solar grid powering its Courtyard by Marriott-Lancaster making it the first Marriott property in North America to be 100% solar powered.]

A microgrid is an integrated, low-voltage energy generation and distribution system made of solar panels, storage batteries, energy inverters, and control software that manages the generation, storage, and distribution of the energy produced. Microgrids can be controlled as individual entities or operated in parallel to the public grid. Microgrids can also function independently of the grid, protecting against voltage fluctuations, power failures, or other anomalies coming from the electrical grid, thus adding an additional layer of reliability, while relying on the storage batteries.

The Costa Rica Marriott Hacienda Belén initiative stems from the company's sustainability goals and Marriott International's 360 Serve program, through which the hotel chain aims to positively impact the communities where it operates.

“Our goal with this initiative is to help the environment by reducing carbon emissions while also reducing electricity consumption. Since 2017 we have been investing in sustainability programs—a central element in improving our guest experience,” said Daniel Grew, Strategic Sustainability Advisor for CPG Hospitality.

greenenergy®, a Costa Rican-based company, will install the microgrid in alliance with the Massachusetts-based company Heila Technologies, whose control and optimization software Heila Edge® will serve as the brain of the microgrid. Heila is known for its decentralized approach to microgrid control and optimization, which is the most state-of-the-art architecture in the industry today. The Heila Edge® Platform leverages emergent intelligence that automatically connects any power asset, in any configuration, into a resilient operating grid network. Its modular and adaptive nature enables it to scale as demand needs change and the grid evolves, making it one of the most flexible products on the market today.

“Today's traveler is seeking a resort that is both comfortable and runs an environmentally-friendly operation. This microgrid deployment is part of a larger environmentally-focused initiative at Marriot, which also includes planting more trees around the country,” said Dennis Whitelaw, general manager of Costa Rica Marriott Hacienda Belén.

The investment represents an important change on how the hotel will operate on an energy level. The microgrid deployment work is expected to be completed in November, creating the most advanced control and optimization system nationwide with its decentralized control technology. Through the installation, the hotel will generate 30 indirect jobs in Costa Rica.

"At greenenergy, we are constantly evolving, researching, and innovating to offer clean energy solutions with the most advanced technology that contributes to the economic reactivation of the country, benefiting our clients in their pursuit of their triple bottom line objectives," said Fernando Ortuño, CEO of greenenergy® Costa Rica.

"Our mission is to provide smart solutions to more projects like this that are focused on energy savings and resiliency, and we are proud to have been chosen by greenenergy® as the preferred controls and software solutions provider. We will continue working together in the future to offer to other Costa Rican and regional companies the most advanced electric microgrids," added Francisco Morocz, CEO of Heila Technologies.