Club Med, the pioneer of the all-inclusive resort concept, announced that Carolyne Doyon will assume the role of president and chief executive officer for the company's North American and Caribbean business division, effective immediately. In her new role, Doyon will oversee more than 3,000 employees and lead the sales, operations and development activities for four regional offices and nine resorts.

Doyon is succeeding Xavier Mufraggi, who held the position of CEO for North America and the Caribbean for more than 10 years. During his tenure, the North American division flourished into a sustainable and profitable business unit, achieving high growth performances each year. Mufraggi has now been promoted to the new CEO for the Europe, Africa and Middle East division, reporting directly to Henri Giscard D'Estaing, the company's global president.

"I am proud to announce the nomination of Carolyne Doyon, currently senior vice president of Canada and Mexico, to chief executive officer for North America and the Caribbean," shared Henri Giscard D'Estaing, President of Club Med. "Carolyne's determination, sharp commercial expertise, and strong leadership will be instrumental to achieve the strategic goals of the North American division."

In her new role, Doyon will report to Michel Wolfovski, deputy CEO of Club Med, and will spearhead the North American division's current plans to grow capacity by 30 percent by 2021. Doyon will oversee the strategy and execution to maintain stellar guest satisfaction, develop internal talent, and expand the division's business with renovations to the existing portfolio as well as the opening of new resorts, including Club Med Miches Playa Esmeralda, Dominican Republic, and the first Club Med resort in Canada, Club Med Quebec Charlevoix. She is relocating to the North American headquarters in Miami, FL.

Doyon joined Club Med in 2008 as a sales director and was promoted to vice president of sales, transportation and marketing within the same year. She has been a key contributor to the success of the North American division by increasing the business volume in Canada by 75 percent, doubling the commercial contribution and rebalancing the distribution model. She has also been at the heart of the Quebec Charlevoix project, marking the return of Club Med's ski offering to North America.

"I would like to extend my heartfelt thanks to all our partners in the Canadian and Mexican travel industries for their unfailing support, leading to the great successes we achieved together," said Carolyne Doyon, CEO of Club Med North America and the Caribbean. "My new position will keep me in direct contact with the key stakeholders in Canada and Mexico, while expanding my relationship with the American market, as we build new business together, launch new amazing resorts and set the foundations for a new era of expansion for Club Med in North America." 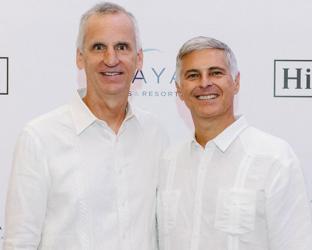