05/26/2017
Get great content like this right in your inbox.
Subscribe
City Winery venues across the United States combine a fully functioning winery with intimate concerts, food and wine classes, fine dining, and more. With more than 300 events in 2016, City Winery decided that it was time to redesign and renovate its AV technology to communicate seamlessly across each venue’s many rooms through a singular interface. To do so, they called on Nashville-based technology integration firm Tour Supply Inc.

Tour Supply Inc. suggested that ELAN serve as the venue’s ‘brain,’ and that the system be built out from there.

The systems across City Winery’s multiple locations are nearly identical. Tour Supply installed one ELAN gMV1616 HDMI 16x16 Matrix and two ELAN gSC10 System Controllers to distribute the content and automate it. They also integrated seven ELAN gTP7 in-wall touch panels, one ELAN KP7, and the ELAN App on employees’ phones, which enables instant control from anywhere. Now, any employee in the New York, Atlanta, Washington D.C. and Nashville locations can control the venue’s many displays, televisions, and projectors, as well as the extensive multi-room audio and integrated lighting systems.

Wascom and his team use one ELAN gMV1616 HDMI 16x16 Matrix with 72 audio input paths and 64 audio output paths to carry HDCP-compliant HDMI, Ethernet, serial and IR signals over a single cable via HDBaseT. Now, City Winery can easily distribute audio and video via a Cat-5 cable and convert it into HDMI to distribute to audio and video devices throughout the facility. Since the venue often holds various events that use both professional and commercial audio simultaneously, the need to distribute multiple signal types is of the utmost importance.

City Winery will often hold a private dinner, cooking class, and concert simultaneously, in different rooms of the same venue. Each of these events requires a unique audio and video signal. With only one ELAN gMV1616, it can distribute that content seamlessly. And through the ELAN controller, it is able to automate each device.

City Winery’s managers and bartenders have control over the ELAN touch panels when appropriate. The system is separated into zones by room; if a manager is overseeing a private dining event, he can easily control the lighting, audio and video within that part of the facility. Or, he could simply click a “dinner party” setting and have all various commands occur simultaneously.

“We absolutely love the new system’s ease-of-use,” said City Winery Vice President of Business and Venue Development Greg Kitowicz. “The instant control allows our staff to change the ambiance on-the-fly as needed. Particularly, having the Mobile App has been a game changer for all five of our facilities. It’s very convenient.”

The venue also uses multiple displays throughout, especially in the concert venue area. To ensure that each display receives flawless signal input, Tour Supply Inc. integrated a Gefen EXT-HD-DSMP Digital Signage Media Player. Through it they can easily distribute digital signage content to multiple displays across the venue.

Additionally, with stricter fire codes from the facilities management, it was necessary for ELAN to become part of the fire control system. Now, when an alarm event goes off, the ELAN system mutes all audio outputs, disables all TV’s and projectors, retracts the screen and turns every light on in the facility as well as sets the stage lighting to a neutral state.

With so much high-end equipment working together, Tour Supply recommended that each City Winery location back-up their products with Furman power conditioning products. They integrated a Furman F1500-UPS Uninterruptible Power Supply into the AV system’s central equipment rack to ensure that the system would remain intact in the event of a power outage, and installed six Furman PST-8 Power Conditioners with Series Multi-Stage Protection Plus (SMP+) to guarantee that all the system’s AV components receive clean power. City Winery also utilized the BlueBOLT remote energy management to allow the F1500 to automatically power-cycle the cable modem after an outage is detected. It triggers automated events to the system based on power conditions. 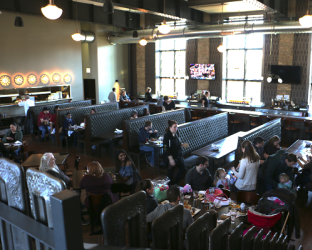