Baristas Coffee Company, Inc. has announced that it is opening the first Virtual Restaurant, which will feature Ben & Jerry’s ice cream and Baristas coffee products along with other snacks delivered to homes and businesses. The Virtual Restaurant will initially be available to customers in select regions near Seattle and is expected to expand once scalable processes are established and tested.

Baristas’ Virtual Restaurant “Munchie Magic” allows national unified branding without the need for physical locations. All menu items are for delivery only and will be fulfilled by partner distribution locations and delivered by its delivery partners. The program is scheduled to begin rolling out November 8th 2019 initially in the Seattle, WA area, focusing on the “couch moments” when consumers most order desserts and the “craving coffee” periods. The initial launch will help refine the processes and allow for the restaurant to expand into other regions quickly.

“By opening the first Virtual Restaurant location literally in our own backyard we will be able to closely monitor and refine our policies and procedures and adopt quickly to what we learn,” Barry Henthorn, CEO, states. “We feel that pairing Baristas products with Ben & Jerry’s ice cream will hit the sweet spot of our target market and we are very excited about expanding very rapidly to other regions.”

Coffee is the number one beverage consumed in America and ice cream is the top ordered dessert 55% followed by brownies at a distant 28%. The two have long been a favorite pairing. Ben & Jerry’s is the No.1 super-premium brand in the US and Baristas Coffee is the No.1 brand for white coffee. 86% of consumers in the US utilize home delivery at least once per month and cite convenience as the No.1 factor. 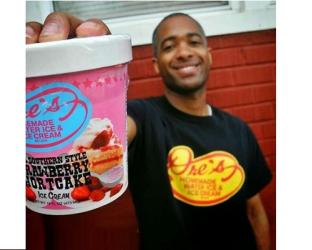