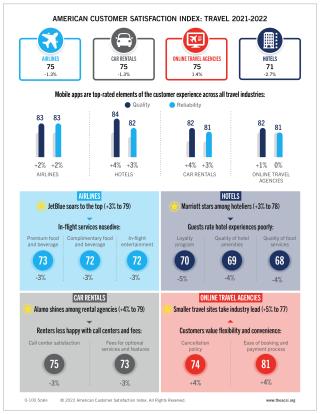 According to the American Customer Satisfaction Index (ACSI®) Travel Study 2021-2022, satisfaction with airlines is flying in the wrong direction, hotels aren’t hosting happy guests, and car rentals can’t get back on track. Online travel agencies are the only industry to improve customer satisfaction, but not by much.

“Many folks ventured out to travel for the first time since the pandemic hit only to be met with lackluster service and dashed hopes,” says Forrest Morgeson, Assistant Professor of Marketing at Michigan State University and Director of Research Emeritus at the ACSI. “We see this with hotels, where the quality of amenities and food services both dip below customer experience benchmarks of 70. Anyone who anticipated their travel experience would feel like the ‘normal’ pre-pandemic days are likely coming away sorely disappointed. While the desire to travel may be up, it might be time to adjust your expectations.”

After ascending to its best-ever score, the airline industry comes back down to earth, as passenger satisfaction slips 1.3% to an ACSI score of 75 (out of 100).

JetBlue flies into the top spot, up 3% to 79. American and United, both up 3% to 77, climb into a four-way tie for second with Delta and Southwest, which slide 3% apiece.

The hotel industry faces the ire of unsatisfied customers yet again.

Guest satisfaction overall falls 2.7% to a score of 71, with over half of the major hoteliers posting ACSI declines of 4% or greater.

Marriott becomes the industry satisfaction leader after improving 3% to 78. Last year’s leader, Hilton, finishes second after dropping 4% to an ACSI score of 76. Best Western is steady at 75, just ahead of IHG, which sinks 5% to 74. Choice and Hyatt each score 73, but the former increases 3% while the latter slides 4%.

Wyndham is stable at 69, followed by the large group of smaller hotels, which plummets 7% to 65. The bottom of the industry belongs to G6 Hospitality (Motel 6), plunging 15% to an ACSI score of 56.

Satisfaction with the car rental industry dips 1.3% to an ACSI score of 75.

User satisfaction with online travel agencies overall inches up 1.4% to an ACSI score of 75.

The group of smaller online travel sites takes the top spot after increasing 5% to 77. Orbitz is next, improving 1% to 76, followed by Tripadvisor, down 1% to 75.

Expedia’s namesake site and Travelocity both score 73, decreasing 1% and 4%, respectively. Priceline remains at the bottom of the industry after stumbling 1% to 72.

The ACSI Travel Study 2021-2022 on airlines, hotels, car rentals, and internet travel services is based on interviews with 6,285 customers. Respondents were chosen at random and contacted via email between April 5, 2021, and March 25, 2022. Download the study, and follow the ACSI on LinkedIn and Twitter at @theACSI.

No advertising or other promotional use can be made of the data and information in this release without the express prior written consent of ACSI LLC.