02/03/2015
Get great content like this right in your inbox.
Subscribe
America's one million restaurants will continue to be a leading job creator in 2015, according to the National Restaurant Association's 2015 Restaurant Industry Forecast. While the operating environment will remain challenging, total restaurant industry sales are expected to reach a record $709.2 billion in 2015 – a 3.8 percent increase over 2014, marking the sixth consecutive year of real sales growth for the industry.

2015 also will mark the 16th consecutive year in which restaurant industry employment will outpace overall employment growth. Restaurants will employ 14 million individuals this year as the nation's second-largest private sector employer, representing about 10 percent of the total U.S. workforce.

"With the economy slowly improving and national employment trending upward, signs are pointing in the right direction for restaurant industry growth," said Hudson Riehle, Senior Vice President of Research for the National Restaurant Association. "Certain components of the business climate remain a challenge, accelerating industry sales in some regions and putting a damper on them in others, but the overall industry is definitely in a better place now than several years ago."

Challenges and Opportunities
Operators will continue to face a range of challenges, including food costs, building sales volume, the economy and recruiting and retaining employees.

With the economy steadily improving and the jobless rate trending downward, restaurant operators are finding that the competition for employees is intensifying.

Labor costs will remain a concern for operators in 2015. Challenges with Affordable Care Act implementation and minimum wage increases have made a significant impact on restaurant bottom lines, as typically one-third of restaurant sales is spent on labor.

Consumer Trends
Roughly one-quarter of consumers say technology options are important features that factor into their decision to choose a restaurant (up from the nearly one-fifth that said the same the year prior).

While restaurants are more rapidly starting to adopt various forms of consumer-facing technology, a gap remains between what consumers want and what restaurants currently offer. That gap is beginning to narrow and will further close over the next several years as restaurant technology evolves and more options enter the marketplace.

Despite increased consumer use of technology options, personal service will continue to be the hallmark of dining out. Consumers still want people as part of their restaurant experience, yet look to technology to increase service speed and convenience.

Consumers are showing increased interest in local sourcing and more restaurants are taking notice, with more than 8 in 10 tableservice operators saying their guests are more interested in locally sourced items this year, compared with 7 in 10 that said the same a year earlier. 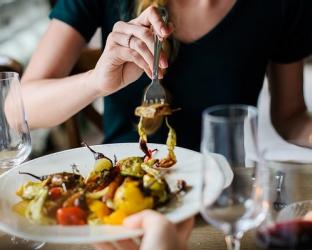 Restaurants
80% of Restaurants to Invest in Tech This Year: Study