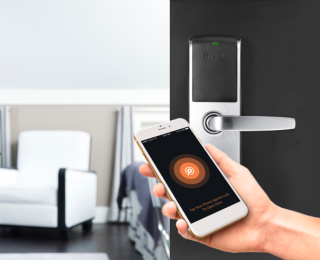 Mobile key as a hotel technology in the U.S. has been around for a decade now.  Also referred to as mobile keyless entry or digital key, it allows a guest to use their smartphone as a hotel key, and was first introduced in 2010 when IHG experimented with an early version at several Holiday Inns.  That mobile key used sound as an access method, creating a tone reminiscent of a fax machine that was decoded by a device installed in the door lock.  The technology proved to be too early and unstable, making it more of a guest issue than convenience.  After some trial runs in hotels, the program was discontinued in 2012.

Starwood Hotels introduced their own version of mobile key called SPG Keyless in November of 2014 as a means to drive engagement with the Starwood Preferred Guest program at the Aloft, Element and W hotel brands.  The program was later expanded to include select Le Meridien, Westin, Sheraton and Four Points properties around the world.  By 2016 Starwood had more than 350,000 SPG members who had registered for the technology.

Hilton launched their own digital key initiative in early 2015 after making a considerable financial commitment to develop a proprietary product that would be easier to use, faster and more stable than any versions that had come before.  In 2016, Hilton announced that it would expand the tech to 600 hotels with the intention to have the entire portfolio of Hilton hotels worldwide offering mobile key by 2018.  As of the end of 2019, Hilton has over 4,000 hotels offering mobile key to millions of guests that use it to check-in prior to arrival and in many cases, skip the front desk entirely by using their digital key to access the guestroom.  The Hilton app has received a number of rewards for design, utility and guest engagement.

Following the acquisition of Starwood by Marriott in 2017, mobile keyless entry was on the radar as a way to create competitive differentiation in Marriott hotels.  Using the legacy Starwood tech as a starting point, Marriott developed a more stable and user-friendly mobile key for Marriott Rewards members to use and rolled it out to hundreds of hotels in 2018.  By years end in 2019, over 1,800 Marriott hotels offered mobile key as part of their digital guest experience that includes mobile check-in and mobile check-out.  The brand expects to have it available in all 7,000 properties by the end of 2020.

Hyatt Hotels soon followed the trend, introducing their own mobile key in 2018 that can be found in hundreds of hotels today.  Other major hotel brands such as Best Western are requiring that all new builds or hotels undergoing renovation purchase locks that have digital capabilities.  The list of major hotel brands that are embracing keyless entry goes on and on.  So has mobile key gone mainstream?

Mobile keyless entry can certainly no longer be considered ‘experimental’ or ‘early stage’ technology after a decade in the market.  Millions of travelers have experienced using their smartphone as a hotel room key.  Within the largest global hotel brands, mobile key has certainly gone mainstream with the majority of properties offering the perk to their loyalty program members around the world.  On the independent hotel side and among smaller hotel brand portfolios, adoption has been slower but saw dramatic gains from 2018 to 2019.  It’s estimated that around 20% of all hotels in those segments offer mobile keyless entry today.  By the end of 2020, that figure is estimated to grow to around 25%.

Given the significant advantages that mobile key offers over the traditional plastic keycard, hoteliers agree that mobile key becoming mainstream is inevitable.  Guests increasingly expect to use their smartphone to control their environment – including room access – and the ability for hotels to improve security while reducing workload on the front desk and eliminating the expense of disposable plastic keycards makes the decision to go ‘keyless’ an obvious choice.